Two Generations Of Aviation Legends – Up Close & Personal
Presented By

The honor of your presence is requested for an intimate evening among two aviation legends, R.A. “Bob” Hoover and Sean Tucker. This event is a unique opportunity to interact with two living legends about their lives in aviation and unprecedented careers.

Event limited to two days only. Seating is limited.
Please RSVP to the appropriate contact below
as soon as possible to ensure a seat. 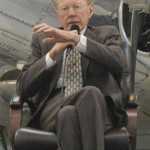 Fresh o the premier of the new documentary R.A. “Bob” Hoover: Flying The Feathered Edge, the 92-year old  aviation legend is eager to share his  experiences with you.

One of the founding fathers of modern aerobatics, Robert A. “Bob” Hoover is a former world-class air show pilot and highly decorated United States Air Force test pilot.  Hoover served with the 52nd Fighter Group in Sicily where his military career included honors such as the Distinguished Flying Cross, Soldier’s Medal for Valor, Air Medal with Clusters, Purple Heart and the French Croix de guerre among others.

Hoover is considered one of the founding fathers of modern aerobatics, and was described by Jimmy Doolittle as, “… the greatest stick-and-rudder man who ever lived.” In the Centennial of Flight edition of the Air & Space Smithsonian, he was named the third greatest aviator in history. 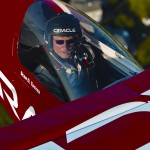 Sean Tucker earned his pilot’s certificate at age 17. He has been  flying airshows worldwide since the mid-1970s and

considered the world’s premier airshow performer. Tucker has  own more than 1,200 performances at more than 450 airshows, in front of more than 100 million spectators.

Sean has been named as one of the Living Legends in Aviation, National Aviation Hall of Fame inductee, recipient of the Crystal Eagle Award, the General Charles E. Yeager International Aeronautical Achievement Award, inductee at the 2001 USAF Gathering of Eagles, and named as one of the Living Legends of Flight. This raises Sean into an elite group of aviators and astronauts that includes General Jimmy Doolittle, General ‘Chuck’ Yeager, Bob Hoover, Gene Cernan and John Glenn.