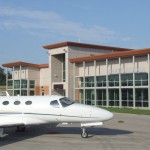 A Grand Opening event held at the facility on August 11 brought out more than 250 Chattanooga community and business leaders from the area. The event featured a silent auction that raised nearly $11,000 for St. Jude’s Children’s Research Hospital and the 400 Chattanooga families who have undergone treatment there. In addition to the charity auction, Wilson Air Center was pleased to welcome static aircraft displays from manufacturers like Cessna, Hawker and Embraer.

Aesthetically, the terminal and office areas are decorated by photographs and paintings depicting Chattanooga landmarks and attractions. Created by local artists, these unique pieces give the new facilities an upscale and professional feel while retaining the warmth and hospitality for which Chattanooga and Wilson Air Center are known.  The entire facility has been constructed to LEED Standards from the U.S. Green Building Council, resulting in a more eco-friendly aviation facility.

“Wilson Air Center customers can expect the same quality and service at the new Chattanooga location that they receive at all our locations – along with all the extras that come with building a facility from the ground up.” said Dave Ivey, vice president, Wilson Air Center.

Wilson Air Center is credited with reinventing the corporate aviation support industry by blending a heritage rich in hospitality management and a long-standing passion for aviation.  The result is a level of award-winning service that is unparalleled in the FBO industry, having been voted #1 Best Chain in the Professional Pilot PRASE Survey 4 out of the last 5 years and as #1 Best FBO for a record 9 consecutive years (2000-2008) in the Aviation International News Annual FBO Survey.