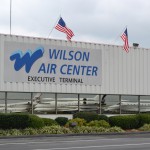 Aircraft began rolling into Wilson Air Center the Friday before the convention, 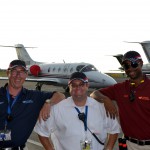 August 31st, with chartered airline aircraft for all the major news networks and government entities arriving.  During the course of the week, eleven separate airline charters were handled, consisting of over 1,000 passengers.  Major commitments for security, equipment and support services necessitated Wilson Air to ground- handle 48 military operations.

In addition, business jet passengers, including attendees, delegates, governmental officials, guests and supporters, arrived in force throughout the week. By the end of the convention, Wilson Air Center handled over 640 aircraft arrivals and departures without incident or delay. 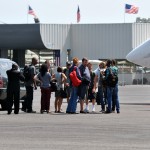 The TSA worked closely with the flight crews and Wilson Air Center employees to minimize delays.  This collaboration was deemed quite successful, as over 64 aircraft and 380 passengers elected to utilize the “gateway” inbound and outbound services offered by the TSA.

Wilson Air Center added to the excitement by making their theme for the week, “Proud to be an American.” All employees wore red/white/blue flag hats while all the buildings were draped in dozens of flags and patriotic colors.